Successful outcome of the EC Study on Functions and Effects of Standards, carried out by a consortium led by EY and composed by MENON Economics and KNOWENCE

A recent Study, commissioned by the EC and published in the European Commissions website shows, amongst other conclusions that:
- There is a positive relation between the net stock of European standards and productivity: The results indicate that a one percentage point growth increase in the stock of European standards is associated with an increase in EU and EFTA gross value added of approximately 8.4 billion euro in the following year.
- The largest productivity effects from European standards seem to be realised downstream in the value chain (largest productivity gains in the sectors buying inputs from the sectors that apply the European standards). This is an important finding for policy implications, because it means that the largest benefits appear to be realised by firms which are not the one undertaking the main cost of standardizing.
- European standards facilitate SMEs´ participation in efficient value chains. One of the main mechanisms through which standardisation promotes productivity is interoperability along the value chain. The interoperability effect of applying European standards is particularly relevant for SMEs’ ability to access global value chains. European standards can create efficient value chains in markets where SMEs play a prevalent role.
- There are more than 155000 experts * participating in national and European standardisation (including NSBs/NCs and participants in CEN, CENELEC and ETSI), representing 0.1% of all employees in the EU.
- European standards have an average total development cost between 780,000 EUR and 1,000,000 EUR.
- Standards have a positive effect on activities that contribute to 2.1% of the Europe’s GDP (2019) and standards also create the premise for the market of testing, inspection and certification in Europe which accounts for 0.2% of EU GDP (2019).
- More than 5,000 voluntary European and international standards support the application of mandatory legal requirements contained in almost 800 pieces of legislation in Europe.
- The ESS directly tackles a majority of Global Strategic Topics as defined by the World Economic Forum, including those linked with the Green and Digital transition/Green Deal, as well as supporting the achievement of most of the UN Sustainable Development Goals.
- European standards contribute directly to the detection of more than 80% of the dangerous consumer non-food products notified in Europe.
- Standards are referred to in public procurement files that contribute to at least 0.42% of the GDP in the European Union.
- The standards mostly referred to in public procurement files and in Safety Gate / RAPEX notifications are harmonised standards.
- European standards are mainly used across investigated sectors to improve quality of products and services as well as to comply with regulations.
- Most companies surveyed agreed that European standards have a large positive effects on compatibility and interoperability.
- European standards are thought to allow companies to demonstrate to their customers the incorporation of state of the art and consensus-based safety requirements and increase the quality of goods and service that is perceived by consumers. They also promote environmental protection by helping companies demonstrate compliance with environment-related regulations and requirements.
- Self-declaration of conformity based on Harmonised standards is the preferred route for conformity assessment in the context of NLF / NA legislation (60% of companies perform in-house testing).
- Compared with other models of conformity assessment in the world, the NLF / New Approach provides simpler, faster and cheaper market access procedures, supporting the competitiveness of companies.

This study has been developed by a consortium composed by MENON Economics, KNOWENCE and led by EY. 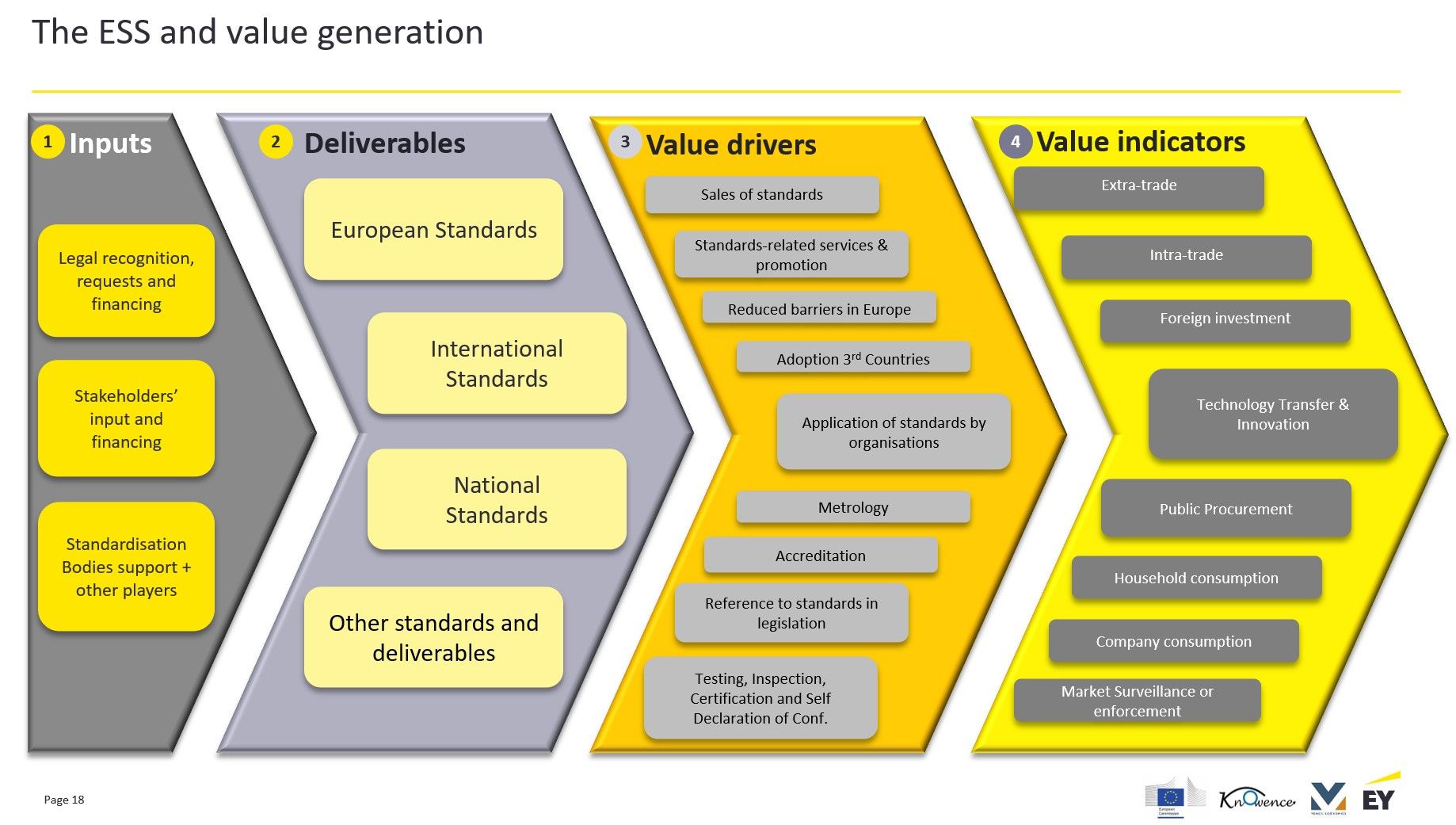